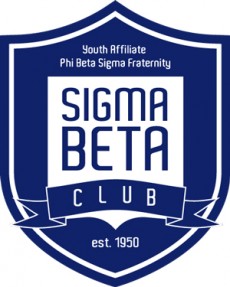 About the Sigma Beta Club...

The Sigma Beta Club, originally called the “Beta Club,” is a premier National Program whose existence dates back to the early 1950. It was launched under the guidance and leadership of the Honorable Dr. Parlett L. Moore. Sigma Beta Club has been an essential part of the total organizational structure of Alumni chapters in Phi Beta Sigma Fraternity, Inc.

The purpose for the Sigma Beta Club is many. The Club is an organization for young male students that gives young men the opportunity to meet with each other on a regular basis outside the school atmosphere to discuss their interest and problems. The Club also gives its members a chance to meet with college and professional men on a regular basis;therefore, exposing the membership to various viewpoints of educational advancements. The club introduces its members to the national programs of Phi Beta Sigma Fraternity, Inc.

Sigma Beta Club programs are geared to meet the needs of its members, while at the same time provide them with a well rounded outlook that is needed to cope with today's society. The enrichment programs are cultural, social, and athletic. They are designed to give members a chance to be innovative, thereby instilling self confidence and a feeling of accomplishment. Service projects such as community clean-up, assistance to the elderly, March of Dimes, etc, thrust Club members into community involvement.

The club motto is: Next Generation of Leaders, Accepting the Responsibility, Loving the Challenge

WE ARE THE SIGMA BETA CLUB OF BIRMINGHAM

WE WORK HARD and WE PLAY HARD

​WHAT IS A SIGMA BETA?

Alongside the Code of Ethics, we expect the following for prospective members:
OPEN MIND
WILLINGNESS TO CHANGE FOR THE BETTER
POSITIVITY
HARD WORK
DEDICATION
and
SERVICE

The members of the SIGMA BETA CLUB has joined with many other organizations in and around Birmingham, Alabama with the "Adopt-A-Mile" project.  This project allows an organization to select a single mile of their own along the Birmingham roads to clean and maintain.  The young brothers of the SIGMA BETA CLUB selected their mile in the early 2000's in the suburb of Woodlawn on 1st Avenue.  Because of their accomplishments and dedication, the young brothers today are working to keep the mile one of the cleanest around.